The 10 Most Important Luther Sites in Erfurt and its Surroundings

Erfurt is not just only the capital of Thuringia but also the place of study and creative place of Martin Luther. During the early 16th century he studied philosophy and legal sciences at the University of Erfurt until he began his theological education at St. Augustine’s Monastery during 1505. 1507 he was ordained as a priest at the Cathedral of St. Marien in Erfurt. Many places in Erfurt and its surroundings were stations in Luther’s life and are destinations for many tourists and ecumenical pilgrims every year.

The Luther Trail is a pilgrim and hiking trail for all those who are interested in Luther’s work and his path of life. In Thuringia it leads along more than 30 sites of the Protestant Reformation which are connected to Luther and his companions. In Erfurt, St. Augustine’s Monastery is the central juncture of the Luther Trail. From here you can follow many different routes. These lead from the historic city to the city borders and make 60 kilometers of the route. Guided tours aren’t a possibility but it’s easy to explore the Luther Trail on your own since there are certain “L”-markings that lead the way and with which you can go on a longer hike along Luther’s trails.

The main building of the former University of Erfurt, the Collegium maius, is located across from Michael’s Church which you can reach within a five minute walk, starting at St. Augustine’s Monastery. Here Luther began his studies at the Faculty of Arts during 1501 and studied  legal sciences for a few months during 1505. The building was completely reconstructed after its destruction in 1945 and is used by the Evangelical Church in Central Germany  since 2011.

During his studies Luther lived in the so called „Georgenburse“, a home for students and teachers of the University of Erfurt. It is located at the Lehmannsbrücke next to St. Augustine’s Monastery and can be reached quickly. Today it is a place to meet and be educated at. Furthermore, the attic contains a pilgrims refuge and the ground floor a permanent exhibition about Luther’s studies during the Middle Ages.

If you follow the Luther Trail and head north for about 10 kilometers you get to the Lutherstein next to the Luthersee in Stotternheim. The Lutherstein marks the place where legend has it that in 1505 Luther was caught off guard by a thunderstorm and vowed to Saint Anna that he wants to become a monk. After this incident Luther began his theological education at St. Augustine’s Monastery. That is the reason why the Lutherstein marks a turning point of the Protestant Reformation. A green area with benches and a shelter surround the Lutherstein and invite guests to linger.

Build around 1300 the Protestant Monastery of St. Augustine was part of one of the most important phases of Martin Luther’s path of life. On July 17th 1505 he joined the monastery and became an Augustinian monk. Only two years later he was ordained as a deacon. Today St. Augustine’s Monastery is an ecumenical event and meeting center and is used as a shelter for those who want to walk along the Ecumenical Pilgrim Path. Furthermore, there is a permanent exhibition BIBLE-MONASTERY-LUTHER (“BIBEL-KLOSTER-LUTHER”). Luther’s cell, where he lived during his time at the Monastery, can be visited as well.

The Cathedral of St. Mary (“Dom St. Marien”) is only a 10-minute walk away from St. Augustine’s Monastery and is more than 1.200 years old. It is one of the many landmarks of Erfurt and is located next to the parish church St. Severi at the Domberg. The latter can be reached if you climb up 70 steps. Since 1994 the cathedral is the cathedral of the diocese of Erfurt. Not only the high Gothic choir, the magnificent choir windows or the Romanesque sculptures are worth visiting but also the largest free-swinging bell in the world “Gloriosa” inside the cathedral tower.

The Merchant’s Church St. Gregorius (“Kaufmannskirche Erfurt”) is located at the Anger, one of the central places of Erfurt and only a 10-minute walk away from St. Augustine’s Monastery. It is one of the oldest parish churches in Erfurt and the only church with two towers. 1522, during the Protestant Reformation, Luther preached at the Merchant’s Church “Vom Kreuz und Leiden eines Christenmenschen” – the suffering of a Christian. In remembrance of this important sermon, pulpit, font and altar were equipped with pictures of the Lutheran doctrine during the 17th century. Moreover, a memorial stone in cross shape was installed at the outer church wall and in front of the church a Luther memorial was built.

Luther memorial in front of the Merchant’s Church

During the Protestant Reformation Martin Luther preached at the so called ”Barfüßerkirche” as well. On his way to the Marburg Colloquy during October 1529 Luther visited Erfurt, the city where he had studied and joined a monastery, and preached a sermon at the Barfüßerkirche on October 11th. This church was one of the most beautiful mendicant churches up until its destruction during World War II. There are still theatrical performances happening inside the ruin. The Barfüßerkirche is in walking distance to the Schlösserbrücke and can be reached by foot within 11 minutes starting from St. Augustine’s Monastery.

Outer wall and tower of the Barfüßerkirche

After Luther’s death 1546 in Eisleben, elector John Frederick the Magnanimous assigned Erfurt’s caster to cast a gravestone. Because of the war it was only transported to Jena where it is stored inside the St. Michael’s Church. The model made of wood that was used is stored inside St. Andrew’s Church (“Andreaskirche”) in Erfurt which is a 10-minute walk away from St. Augustine’s Monastery.

The team of St. Augustine’s Monastery can help you plan your tour to the Luther sites. If you need a city map or you want to attend a guided ecumenical city tour we are happy to provide further assistance! 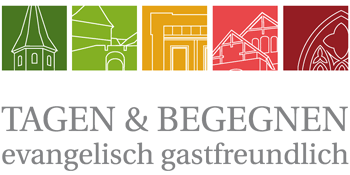 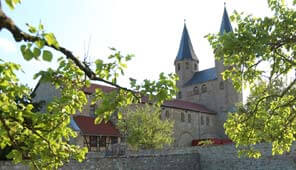 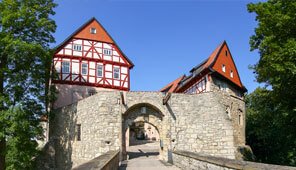 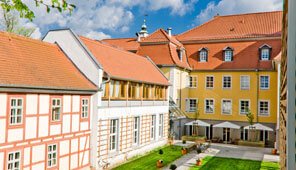 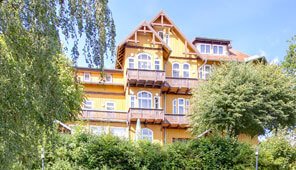